Not only an espionage thriller, "An Involuntary Spy" is an expose on the dangers of genetically engineered foods, and is used as course material for Columbia University's "Environmental Ethics, Values and Justice" course.  For more information, click on the icon corresponding to the bookstore of your choice below. 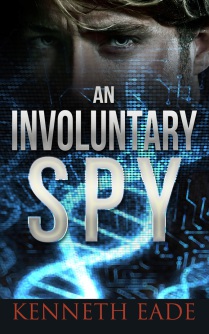 Midwest Book Review said, "Any who want a more realistic, modern-day James Bond complete with contemporary ethical concerns will find themselves held hostage to the fast action and intrigue in An Involuntary Spy, right up to the satisfyingly-unpredictable conclusion made all the more powerful for its real basis in today's uncertain experiments, compliments of Monsanto, Dow and other genetic manipulators."  D.Donovan, Midwest Book Review

Bubble WS said, "There's nothing better than spending a lazy afternoon with a cup of hot chocolate and an action-packed thriller that can help you forget about your surroundings and take you to a world of spies, agents, and unlikely heroes.

If you plan on spending such an afternoon, then "An Involuntary Spy" is one of the best choices you can make. Adventure, corruption, passion, excitement, and an average guy who never thought his perfectly normal job would get him into so much trouble. What more could you ask for?"  Ross Winters, Bubblews

Literary Afficionado said, "Eade's skill with writing dialog is brilliant. His technique for propelling a story forward is second to none. Bind a controversial subject about the environment, the unraveling problems of US governmental secrecy, the transparency of the Internet, and a good old-fashioned thriller and you have Kenneth's next step into prominence in the public's eye." Grady Harp, Literary Afficionado

Seth Rogan was a bad spy. That’s because he wasn't a spy at all. Just a guy trying to do the right thing. As a biologist for the largest biotech company in the world, he had a great job, and enjoyed all the perks. But when asked to do some tests on the company's genetically engineered (GMO) foods, he uncovered secrets that entangled him in a web of corruption, fraud and conspiracy that he wanted no part of, but could not escape from. In an espionage story of mystery and suspense so true to life it could almost be from today's newspapers, Seth, having bit the hand who fed him, is on the run from CIA, the FBI, and the full overreaching strength of the United States government, like Jason Bourne meets Mission Impossible, charged with espionage, who finds temporary refuge with an old enemy-Russia. But his peace is about to be broken as he finds himself in the role of an involuntary spy.